Saturday, December 27
18:40 – I’m standing alongside the road out of town, holding my thumb out with one hand and a paper sign reading “Tornquist” in the other, wondering if this will work. Although I’ve always said I would never hitchhike alone, especially not in a foreign country, I’m bending my rules now. I had two women from the town tell me to try it, and I’m feeling confident enough in both my instincts about people and my willingness to speak up if I don’t feel comfortable riding with someone to give it a shot. I’ve never hitchhiked before. You only live once, right?

Flash back to an hour ago – I mosey over to the bus stop a little early, not having the energy for anything else after the sweltering afternoon, and hear my new least favorite Spanish phrase a second time – “el micro se rompio”. My language skills start to crumble as I panic, realizing that a later bus won’t get me to Bahia Blanca in time to make my connection. I need to work out an alternate plan entirely through conversation in a language I barely speak. I’m overwhelmed for a few minutes and at a loss for what to do, but the woman at the bus company is patient and talks slowly and finally finds me a connection in a neighboring town that will get me there with an hour to spare. The only problem? There are no buses going to this neighboring town and a taxi will cost me $300 pesos. “No, esta demasiado caro, tenga que ir con dedo,” she instructs me, sticking her thumb out to demonstrate. I consider paying the extra cash for the taxi – I’m a woman, traveling alone, white, with limited Spanish… but then I think, you know what, you came here for a challenge, you came here to grow more confident and think creatively and not just throw money at your problems, so go on. Give it a try. If anything feels wrong you can go back to the bus office and have them call you a taxi.

6:55 – I assume the biggest problem will be finding a ride, but I’ve only been waiting 15 minutes when a big red pickup truck pulls over and an old man in a faded tshirt and worn jeans opens the door. He looks like the kind of guy you would call to fix your furnace or help landscape your garden. I generally trust my instincts about people, and I don’t sense any danger from this guy, so I sling my bag down in the floor of the truck and hop in.

It turns out my driver repairs roofs for a living – like his grandfather, father, and three sons. His name is Roberto (I think) and he tells me the names of all his children and his niece and nephew, though I’ve forgotten them now. His grandparents are from Germany. He asks if I speak any German – “nein” – so we make do with Spanish, and I think I mis-conjugate all my verbs but we get by.

We drive through stunningly beautiful hill country that reminds me again of northern Nevada and parts of southern Wyoming. I’m astonished at how lovely the countryside is here – I remember my friend Camilo and his bicycle trip through this part of South America and feel a little jealous. Roberto must be used to taking passengers along, because he narrates the drive: here you can see trees blackened by a fire last year and already covered by new growth. There’s the famous ventana (window) rock formation – he stops so I can take pictures. In this unassuming little building he knows a guy with a well who bottles mineral water. We pass a cyclist chugging along against the wind – he knows him, too. He tells me the names of the counties as we pass them and shows me where they’re building a new walking path into town. He tells me he’s 77, though he looks to be in his 50s. “Que es el secreto? Agua mineral?” I ask. “Cerveza!” he chortles. 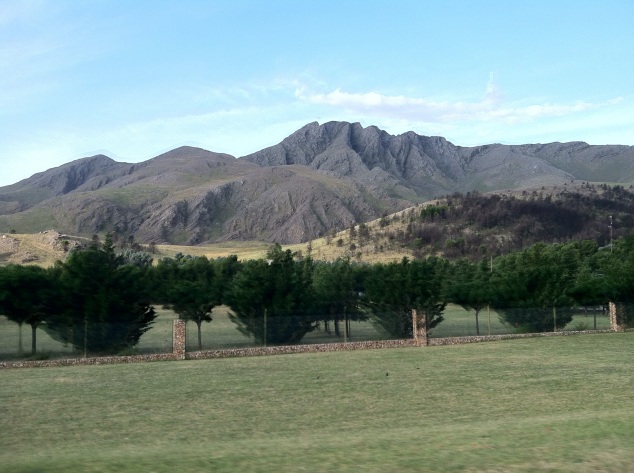 By 19:45 I’m at the bus terminal in time for my new connection, giving Roberto a handshake goodbye and feeling giddy for having done something new and scary and probably a little dangerous and to have had it go so well.

20:28 – and just like that, I’m on the bus headed for my connection in Bahia Blanca. This had better work.

21:04 – a spectacular lightning storm flickers in the west. The bus is almost empty so I move to a window seat where I can watch the storm. I look up the Spanish word for lightning – relámpago. My previous fantasies about how much fun it would be to travel by bike start to fade as the wind picks up and starts to sway the bus back and forth across the road. The rain splatters the windshield and roof.

21:45 – despite the rain, it’s a suspiciously easy and on time arrival. After all the other adventures today, I’m waiting for the other shoe to drop.

Sunday, December 28
00:30 – the bus departs 45 minutes late – no big deal – and finally, I’m on a bus and the bus is going to puerto madryn and if we are lucky the bus will keep running all the way to where it’s going. God, I’m tired.

7:11 – I open my eyes to low, scrubby vegetation, thin yellow grass, and sandy-looking soil. I don’t see the ocean but it looks like we’re close. “Donde estamos?” I ask my seatmate. “San Antonio”.

7:30 – next stop is Las Grutas. I almost stayed here too, but it was going to be too difficult to time the bus journeys. As we leave I listen to Yankee Hotel Foxtrot by Wilco. It’s supposed to be a good album for bus rides, according to a forum I found on Reddit. I watch stray dogs lope along sandy paths between painted sculptures of cartoon characters. I can see the ocean now in glimpses as the dunes rise and fall to my left.

8:00 – one of the bus attendants hands me a packet of instant coffee and an alfajor. I forgot I got a “semi cama con servicio” ticket for this journey – I guess this is the “con servicio” part. I eat the alfajor even though it isn’t gluten free. I forgot to pack enough gluten free snacks for this bus journey and I’m already starving. It shouldn’t cause any problems, or in any case my stomach is already so disrupted from lack of sleep that it probably won’t notice a little gluten thrown in the mix.

10:52 – I’ve been reading a book about Che Guavara when the bus turns slightly and rounds a corner and there is the ocean spread out in front of us with the brown and yellow landscape coming down to meet it. There’s a large town here that must be puerto madryn – I can see large ships in the harbor and highrise buildings clustered together. This is my stop for the day.

One thought on “Epic four-day bus ride through Argentina: Day 2”