I wrote my last post as I was leaving Colombia for Buenos Aires. It’s not a typical move for travelers in South America – most people heading south go overland and visit Peru, Ecuador, Bolivia, even Paraguay or Brazil or Chile first – but I needed to make the trip quickly in time to meet a friend in Uruguay (which is a short boat ride from Buenos Aires). I’ve been in Uruguay for two weeks, enjoying my friend’s company, the beaches and warm people of Uruguay, and a relaxed state of mind.

We drank mate (sometimes more popular than coffee in this part of the world) and cooked meat on the parilla. The beef and sausage in Uruguay and Argentina are excellent, and there’s a great culture of cooking meat slowly for hours over open coals. Wine is excellent and cheap, too. So – wine and beef in the evenings, and mate for the hangover the next morning. In between – hours at the beach, helping with minor construction projects, and enjoying each other’s company.

Camilo left for the US after a few days and I headed to the capital Montevideo. Feeling a little over budget (Uruguay is expensive for South America), I mainly walked around the streets and took pictures, punctuated by an occasional cup of coffee at one of many cafes. Uruguay and Argentina are heavily influenced by European culture, and it’s easy to find sidewalk cafes much like those in Paris. Mate may be more popular, but they still make an excellent cup of coffee here.

(Entrance to the old city in Montevideo) 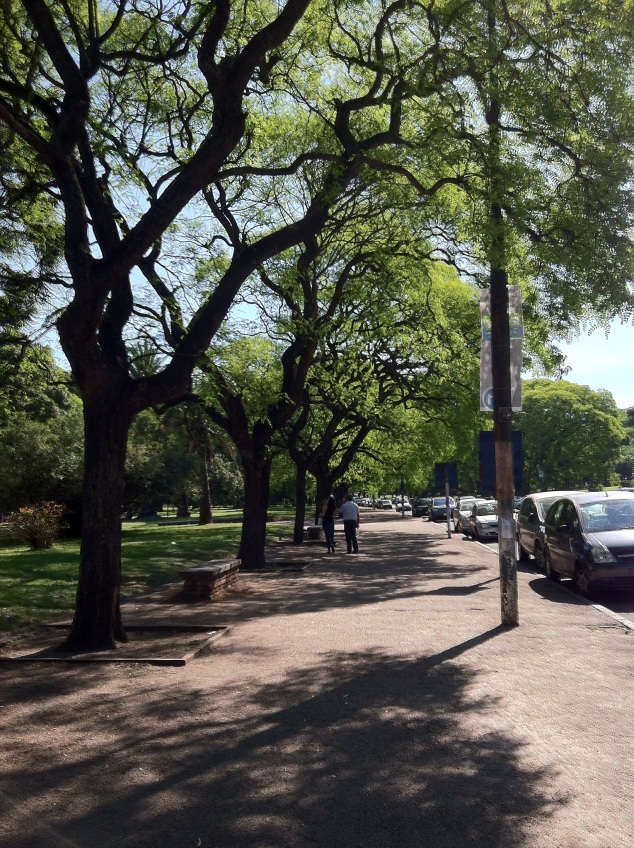 My hostel was full of Brazilians who spoke more Spanish than English, and I spent a couple of evenings practicing by attempting to explain the game of hearts. “Corazones!!!”, I remember shouting many times that night, but ultimately I think I was unsuccessful at conveying the strategy of the game.

The next day at breakfast I discovered that I was heading the same direction along the coast as a Brazilian couple from the hostel, so we decided to drive together to Punta del Diablo.

In the summer this place must be mad, but it’s spring now and the town is nearly silent. For dinner one night we were one of only two parties at a family-run Italian restaurant. The little daughter Catalina played in my lap while we looked at the menu, and her father cooked some of the best salmon I’ve tasted. After dinner, they poured us tiny glasses of their homemade limoncello and introduced us to their six dogs, who were hiding from the storm outside.

When it rains in a tiny beach town there’s not much to do, so we saw a lot of the inside of our hostel. Fortunately, as sometimes happens at hostels, there was a good crowd of travelers, so we managed to pass some evenings in excellent company.

Not far from Punta del Diablo is a remote settlement called Cabo Polonia. It’s not exactly undiscovered (jeep shuttles run there several times a day from a bus terminal), but there are no roads in or out of the place, so one must either take a 4×4 shuttle from the dirt road, or walk down the beach several hours from Punta del Diablo. Like Punta del Diablo, there’s not much to do if the weather isn’t suitable for beach going, but the vibe of the tiny village is lovely and relaxed. There are a few places obviously aimed at tourists, and the rest is little farms, a hostel, and summer homes. We explored the lighthouse among an enormous crowd of school children, and watched a herd of sea lions roaring and rolling around on the rocks by the sea.

I had no idea that countries outside the US have the same Halloween traditions that we do. On the way back to the hostel we passed the town of Castillos, where the streets were blocked to allow kids in costumes to trick or treat. At the hostel our Halloween party consisted of a pumpkin carving contest which was won by a Finnish couple’s impressive rendition of Jack Skellington. They claimed it was their first time carving a pumpkin…

Relaxing is lovely, but I’m not meant to do it forever. Soon it will be time to move on again to explore a new place.

One thought on “Travel update : Uruguay”