My journey around Colombia was off to a rough start in Bogota, and it’s an enormous relief to feel settled into traveling and exploring now. The city of Medellin, the lovely hostel I stayed in, and the lovely people I met there undoubtedly helped me transition.

I fell in love with Medellin. As of today I’ve been here a week, and I would love to stay even longer.

The city is enormous, far larger than any I’ve lived in – about four million residents. Yet there are green spaces – trees everywhere along the streets, little parks tucked around and between buildings. The masses of traffic spew exhaust that sticks in the nose, but the perfect springtime weather (which lasts all year thanks to the equatorial location) makes it easier to forgive them.

I greeted Medellin in my usual fashion by wandering the streets downtown, surreptitiously people-watching and smelling the aromas of new and strange fruits sold by countless street vendors. I won’t sugar-coat it : the streets are generally dirty; poor and drug-addled humans are everywhere in evidence, and the traffic is anarchistic and violent. It is a human city, beautiful and awful by turns just like humans are.

This is evident especially in the slums, which one can see from the air by riding the cable section of the metro system.
It’s hard for me to know what the real story is in these slums. Crumbling, destitute buildings crowd one another, decorated with laundry and dogs and piles of rubble. It looks desperately poor, though it’s also easy to romanticize the neighborhood as you catch glimpses of people greeting one another, cooking, laughing, arguing, all crammed together in a wonderful mass of humanity. I think what’s less apparent from the romantic metrocable are the gangs, violence, and lack of education. I met some foreigners who claimed the people there are happy to live in slums (really? In buildings so flimsy the roof is held on by placing bricks on top rather than nails?). I never found out the real story.

I saw some of the things you’re supposed to see – Medellin is the home of Fernando Botero, whose paintings I saw in Bogota. In a plaza with his sculptures I found another fat cat. 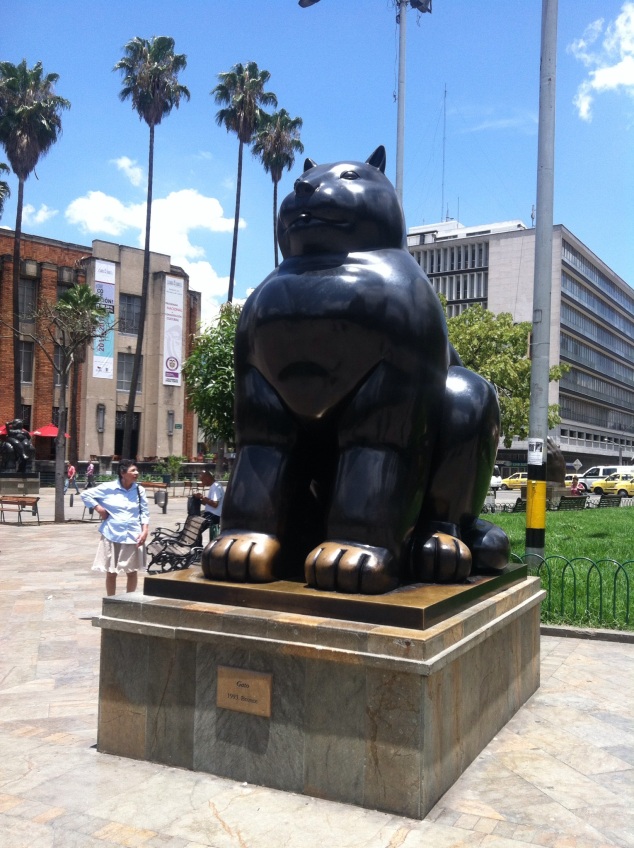 More impressive, though are the Pajaro de Paz (bird of peace) sculptures. In 1995, a bomb was placed in the original bird and exploded near a crowd of people, killing 29 and injuring 200 more. The mangled sculpture was to be removed, but Botero insisted it stay and added a replica of the original, as a reminder of the violence of the past (something Medellin is perhaps so desperate to forget that important events are erased from collective consciousness) – and as a slap in the face of the violent perpetrators, to demonstrate their ultimate failure to disrupt the city’s transformation into a peaceful, artistic metropolis. 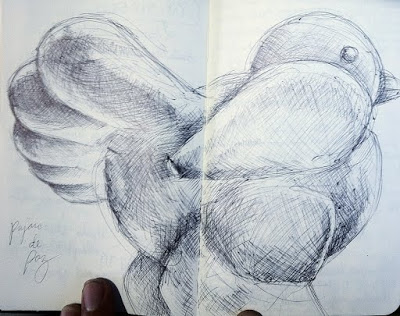 I took a side trip to Guatape, a town near an artificial lake. The main feature is an enormous granite monolith, which I of course climbed. After half dome, Angel’s landing, and Monserrate, I’m beginning to think I have some kind of obsession with long staircases.

It’s the views from the top. 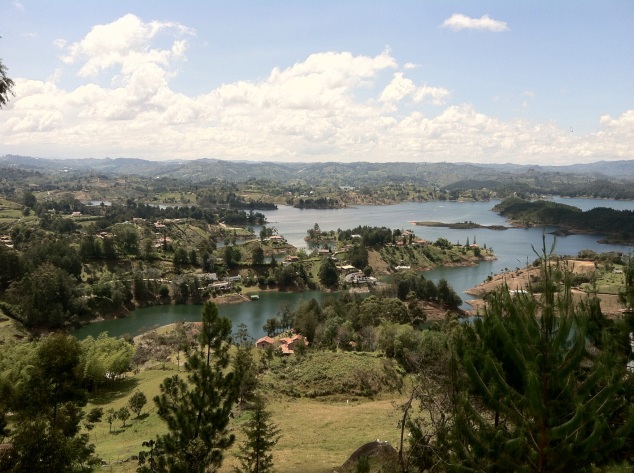 It’s hard to explain why I felt so at home in Medellin. I’m sure the fantastic spring climate is a factor – spring has always been my favorite season. It’s almost enough to make me forget how much I miss the desert (almost!).